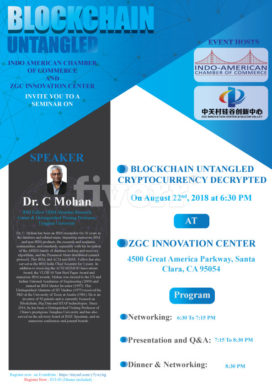 invites you to a Seminar on

Dr. C. Mohan has been an IBM researcher for 36 years in the database and related areas, impacting numerous IBM and non-IBM products, the research and academic communities, and standards, especially with his invention of the ARIES family of database locking and recovery algorithms, and the Presumed Abort distributed commit protocol. This IBM, and ACM and IEEE  Fellow has also served as the IBM India Chief Scientist for 3 years. In addition to receiving the ACM SIGMOD Innovations Award, the VLDB 10 Year Best Paper Award and numerous IBM awards, Mohan was elected to the US and Indian National Academies of Engineering (2009) and named an IBM Master Inventor (1997). This Distinguished Alumnus of IIT Madras (1977) received his PhD at the University of Texas at Austin (1981). He is an inventor of 50 patents and is currently focused on Blockchain, Big Data and HTAP technologies. Since 2016, he has been a Distinguished Visiting Professor of China’s prestigious Tsinghua University and has also served on the advisory board of IEEE Spectrum, and on numerous conference and journal boards.

There are no upcoming events at this time.